‘We don’t leave our people behind’: Lavrov speaks to RT about evacuation of Russians stranded abroad over coronavirus

The coronavirus pandemic prompted an unprecedented rescue operation, with tens of thousands of Russian citizens stranded abroad. Foreign Minister Sergei Lavrov has praised his officials for their efforts in bringing people home. 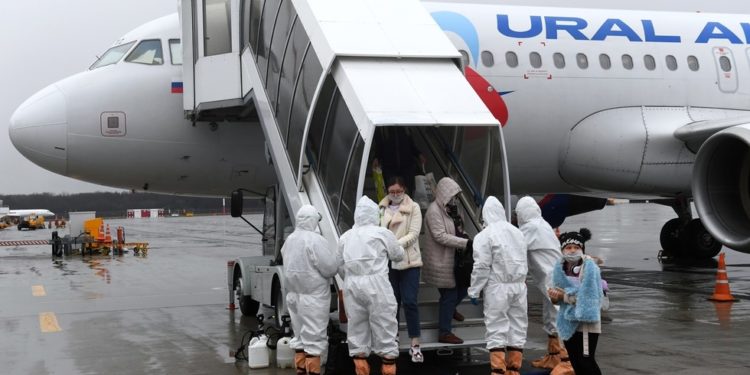 The country had previous experience in bringing back people home in big numbers– after the devastating 2004 tsunami in Thailand, for instance – yet this year’s operation was on an far larger scale, Lavrov told journalist Anton Krasovsky for RTD’s ‘Epidemic’ series.

Sometimes they say: ‘we don’t leave our people behind.’ This was a real life case.

During the coordinated effort from the Russian government, a large part of the evacuation work was done by Russian diplomats, based on the ground. In Nepal, for instance, they set up a tent camp for stranded and financially challenged tourists, providing for them from their own pockets, Lavrov said.

“I was not even surprised. I knew that for the most part our guys are very kind – and many missions got creative in this situation,” he said.

“In addition to people who just went abroad to spend their holidays, there is another large group of Russian citizens who were studying abroad, receiving long-term treatment, or in permanent residence,” Lavrov said.Counting the number of people in need of help proved to be very tricky – it was easy to find organized groups of tourists, but individuals who went abroad on their own and often without a return ticket were significantly harder to locate. Moreover, the coronavirus crisis triggered a mass-return of Russian citizens resident in foreign countries.

All of a sudden they’ve decided that their living conditions in the US, in New York, for instance, greatly ‘deteriorated’ over the course of the pandemic.

A lot of people were in need of help, and the lists of people to be evacuated have been huge, the Foreign Minister said. At the beginning of the mass evacuation operation, Russia’s authorities limited the number of returning people to 500 per day for the Moscow region and to 200 per day for the rest of the country.

“As I said, it was particularly messy with those who were long gone and residing permanently elsewhere who suddenly decided to return. And so they began to fill up these lists. We evacuate, say, five thousand, and then the lists grow by another 10 thousand.”

Despite the efforts, thousands of Russians still remain abroad, mainly in exotic locations very hard-to-reach for Russian aviation. Some people, however, refused assistance and just decided to stay put and wait out the pandemic.