Three firefighters were injured by flames and several villages in the area were evacuated, local emergency services said on Twitter. 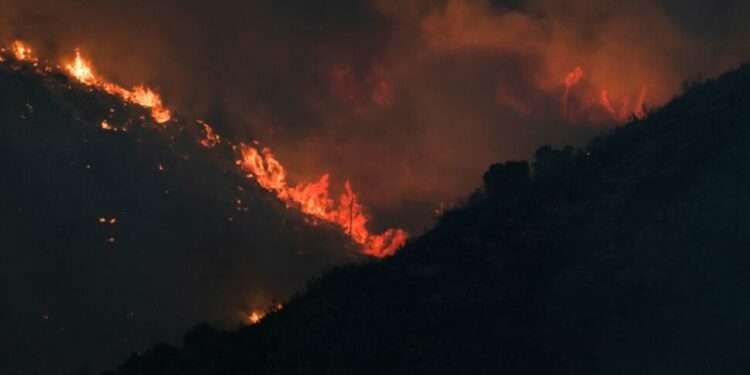 MADRID (Reuters) – A cry of “run, run, run, run” rang out across the hillside as a wall of flame fed by high winds swept down towards four Spanish firefighters, engulfing tinder-dry bracken seconds after they fled for their lives. The wildfire they were battling on Wednesday was in the eastern Valencia region, and the brush with death happened as crews tried to prevent flames from reaching a village in the municipality of Bejis, north of Valencia city.

Three firefighters were injured by flames and several villages in the area were evacuated, local emergency services said on Twitter.

The same fire injured at least 10 passengers on a train on Tuesday, after several panicked and got off as flames approached the tracks, emergency services said.

The driver managed to reverse the train, which had been bound for Zaragoza, and return safely to Valencia city station.

Climate change has left parts of the Iberian peninsula at their driest in 1,200 years, according to a study published last month in the Nature Geoscience journal.

In neighbouring Portugal, more than 1,200 firefighters and nine waterbombing aircraft were battling a wildfire that has ravaged the Serra da Estrela national park and burned more than 17,000 hectares since it began on Aug. 6.

On Tuesday, smoke from that fire enveloped skyscrapers in Madrid, more than 400 kilometers (250 miles) away.

So far this year, wildfires have already burned more than 275,000 hectares in Spain and 87,000 in Portugal, with the latter representing around 1% of Portuguese territory, the highest percentage in the European Union.