Earlier in the day, Trump told reporters that he would resume the daily coronavirus briefings at the White House, possibly as soon as 5:00 p.m. ET on Tuesday. 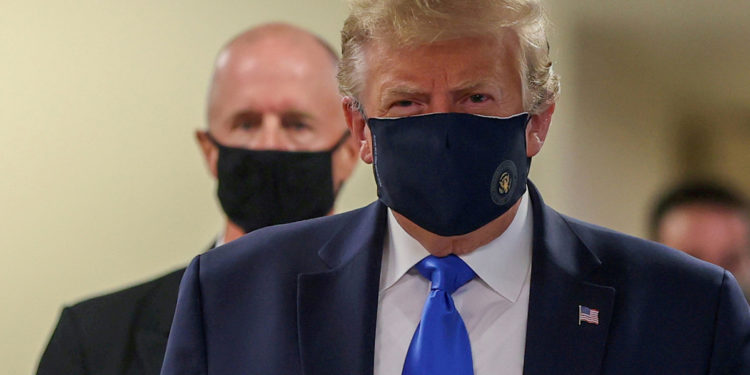 WASHINGTON – US President Donald Trump on Monday called wearing masks “patriotic,” seemingly endorsing the practice after an interview aired just the previous day in which he denied the effectiveness of doing so in curbing the spread of the coronavirus.

Trump in his tweet didn’t explicitly say he would don masks from now on, but said “many people say that it is Patriotic to wear a face mask when you can’t socially distance. There is nobody more Patriotic than me, your favorite President!”

Along with the words, the president posted a picture of himself wearing a mask while visiting Walter Reed National Military Medical Center in Maryland on July 11, the first time he wore a mask in full view of the press since the pandemic reached the United States. He was spotted wearing one behind the scene at a Ford plant in Michigan in May.

Having resisted wearing a mask in the past, Trump has until recently denied the effectiveness of masks in curtailing the spread of the virus.

“I don’t agree with the statement that if everyone wore a mask, everything disappears,” he said in an interview with Fox News anchor Chris Wallace aired Sunday, confirming that he won’t issue a national mask mandate.

The Monday tweet came as the confirmed cases in the United States surpassed 3.8 million and death toll topped 140,800, according to an update by Johns Hopkins University on Monday afternoon. Both of the figures are the world’s largest, leading those of other nations by wide margins.

“I think it’s a great way to get information out to the public as to where we are with the vaccine, with the therapeutics, and generally speaking where we are,” Trump said. “So I think we’ll start that, probably starting tomorrow.”

Trump appeared at the briefings featuring the White House Coronavirus Task Force almost daily between March and April, before the gatherings at the White House West Wing came to a sudden halt.

Vice President Mike Pence and other task force members held the media sessions a few times during the past month when cases spiked sharply in the country.