"Data available from the ministry indicate that the number of donkeys slaughtered each day in the export slaughterhouses is estimated at 1,000," Njagi said in a court affidavit sworn on June 17. 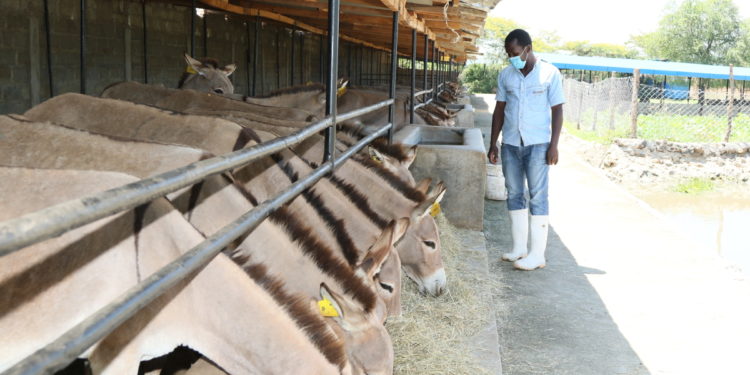 As one approaches the gates of Goldox Kenya Limited located just 800 meters from the equator in Kenya’s Baringo county, what looks like an empty shopping center across the road offers a somber welcome. Until February this year, the shopping center was buzzing with activities as locals offered goods for sale to more than 400 workers who were employed by the Chinese donkey slaughter house.

In February Kenya’s Minister for Agriculture, Livestock, Fisheries and Cooperatives Peter Munya banned the slaughter of donkeys in the country. According to Munya, the ban came against the backdrop of falling donkey numbers due to rampant theft of donkeys in a syndicate that has benefited slaughterhouse owners at the expense of citizens.

However, on June 15, Kenya’s High Court quashed the order. This development has lifted the spirits among operators of donkey slaughterhouses who are hoping their machines will roar back into business soon.

According to Obadiah Njagi, an official at the ministry, the intervention was initially aimed at increasing the dwindling population of donkeys in the country.

“Data available from the ministry indicate that the number of donkeys slaughtered each day in the export slaughterhouses is estimated at 1,000,” Njagi said in a court affidavit sworn on June 17.

However, according to Lu Jin, the general manager at Goldox Kenya Limited, the figures presented by the ministry were highly exaggerated.

“During full operations, our slaughter house would put down 100 donkeys per day and considering that this is the average number for the all the four operational slaughterhouses in the country, it is difficult to know how the ministry arrived at that number,” Lu said.

“In addition, we have established our own breeder and between April and June we never carry out any slaughters in order to beef up donkey stock,” Lu, who said his company has invested more than $4 million in the abattoir and breeder, added.

In 2016, Kenya licensed four export slaughterhouses. With his February directive, the agriculture minister directed the four abattoirs to transform and start handling other animals such as cattle, sheep goat and chicken.

George Ogolla, an administrator at Goldox Kenya Limited, said the closure has had a devastating effect on the workers as well as the local community.

“We have been in compliance with all the requirements laid down by the government and that is why we feel the measures taken by the ministry are unfair. We work closely with the Kenya Society for the Care and Protection of Animals and the director of medical services who pay us regular inspection visits,” Ogolla said.

“Other than the 400 workers employed by the company, the community around us has benefitted a lot from this company. We produce manure as a byproduct which we donate freely to farmers in this area. We also have a water treatment plant which supplies locals with clean water in addition to constructing roads that have opened up the interior areas,” he added.

To curb the claims of donkey theft as a result of the slaughterhouses, Ogolla said all their suppliers get a tender certificate from the procurement office indicating the number of donkeys they have and the source of the donkeys. The tender certificate also bears the date of delivering the order.

However, Ogolla said that despite the court lifting the ban on donkey slaughter, they have not resumed operations because the government has not yet sent a meat inspector who was withdrawn as a result of the revocation. However, they are hopeful that an inspector will be sent soon, marking the resumption of their operations.

Justin Isekon, a breeder working at the Goldox six acre breeding ground, said that by closing down donkey slaughterhouses, the Kenyan government was not addressing the real problem.

“It is possible to rear donkeys on a large scale and the government should support such ventures. We started this breeder in 2018 and we currently have 161 donkeys. This breeder alone has provided employment to the workers, buys feed and leases grazing land from the locals and also provides them with manure,” Isekon said.

According to Isekon, Goldox takes all the necessary measures to ensure that donkey populations in the country are not jeopardized because the business depends on donkeys.