Ban Ki-moon said President Kenyatta’s voice as a statesman had already carried the message across the world. 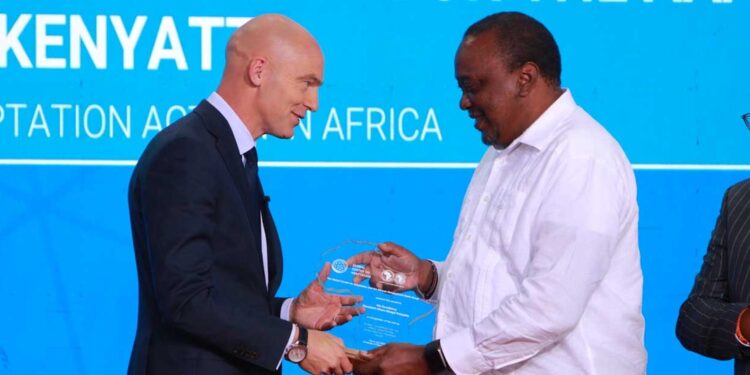 President Kenyatta thanked former Secretary-General Ban Ki moon and GCA CEO Professor Patrick Verkooijen for giving him the role of AAAP Global Champion. He said: “Africa has been most adversely affected by climate change. Adaptation is not just important. It is a survival strategy.” Kenyatta recognized the joint efforts of the three multilateral institution heads “for their tireless efforts in championing the adaptation agenda.” He said: “I am confident that with support from friends like these, we shall reach our goal.”

Adesina said: “We need a champion, a tested leader with a respected global voice. President Kenyatta is a doer. He is a climate-friendly leader. His dynamism, voice and leadership will help as we drive for greater financing for climate adaptation for Africa.”

He explained that Africa loses 7 to 15 billion dollars every year because of climate change, and this figure was expected to rise to $50 billion per year by 2030. He said while nine out of the 10 most vulnerable countries to climate change (90%) were in Africa—accounting for just 4% of global carbon emissions—the continent received only 3% of total, global climate finance.

Adesina added: “Climate change is unfair to Africa and global finance on climate is unfair to Africa. The Bank is leading efforts to support Africa to adapt to climate change. We have doubled our climate finance to reach 25 billion dollars by 2025. We now devote 67% of our total climate finance to climate adaptation, the highest level among all multilateral financial institutions globally.”

Verkooijen said: “This is the battle of our lives, to contain climate change, to adapt to it, and by doing so, tame it. And in you, President Kenyatta, we have a champion lion tamer indeed.”

He highlighted some of President Kenyatta’s achievements and his strong record in standing up for Africa. “This record is globally unmatched,” said Verkooijen. “You pioneered Kenya’s commitment to land degradation neutrality. You ratified the Paris Agreement in record time. You made Kenya one of the first countries globally—not just in Africa but globally—to announce and submit ambitious NDC (Nationally Determined Contributions) targets, and there is much more.”

Verkooijen also recounted visits to Kenya’s Makueni County and Samburu County, where the community is investing in resilience with support from the African Development Bank. With the Bank’s support, he said, they are building water pans and boreholes that reduce the need to seek pasture far from home and which also create economic opportunities to grow crops, diversify incomes and build resilience for forests during the challenging times caused by failing rains.

Verkooijen encouraged the university students not to lean backwards but to lean forward and take advantage of this opportunity to engage in the adaptation agenda for Africa. “You are the future of the adaptation challenge. We look to you to develop innovative solutions for a resilient continent.” He told them he would return to announce the winners of the Disruptive Technologies Entrepreneurship Challenge in Kenya, where GCA and the University will award 50 million shillings ($485,000) each to scale up the most innovative solutions for climate-resilient infrastructure.

Vice Chancellor Stephen Kiama said a landmark partnership agreement between the GCA and the university would support a robust pipeline of investment for infrastructure in Kenya, enhancing climate finance, creating green adaptation jobs, and supporting Kenyan entrepreneurs in the scaling up of sustainable adaptation businesses.

Ban Ki-moon said President Kenyatta’s voice as a statesman had already carried the message across the world. He said: “Amid the bad news, the Africa Adaptation Acceleration Program is rapidly scaling up to deliver solutions on the ground. We are in a long, hard marathon. We have a true champion in you. Thanks to your commitment and determination, I know that Kenya will prove itself, through your government’s partnership with the GCA and the AAAP to be a climate adaptation example for others to follow.”

She stressed the urgency for the green transition to include investments in resilience. She said Sub-Saharan African countries need to spend at least 2-3% of GDP per year on climate adaptation. “No country can do it alone, especially as many have elevated debts following the pandemic crisis.” She said it was critical for the international community to meet or exceed the goal of providing $100 billion in climate finance to developing countries each year, and importantly to make sure that a sizeable amount of the climate finance goes to adaptation in addition to mitigation.

READ MORE: A Florida county is under quarantine due to the discovery of a prized delicacy in West Africa

WTO Director-General Ngozi Okonjo-Iweala commended Kenyatta for being a driving force behind the AAAP. She said his strong voice and leadership would inspire others to scale up and accelerate the actions required to adapt to climate change. She emphasized that trade was a necessary part of the solution to climate change adaptation and mitigation. “Just like the rest of our economic systems,” she said, “trade and the WTO can and must change to best support the just transition to a low global carbon economy and a climate resilient society”.