According to the World Bank, only about half of Ethiopia's population had access to electricity as of 2019. 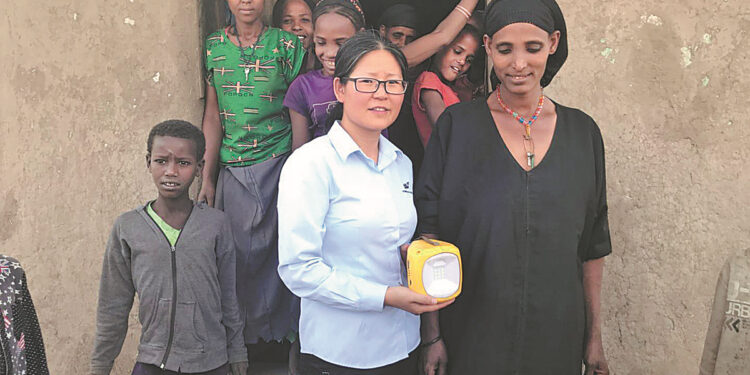 In summer 2019, Li Xia arrived at a school in a small village in Ethiopia.

Locals and students at Nayata High School gave her a warm welcome as she and her colleagues walked among the thatched-roof school buildings.

Li, the founder of Shenzhen Power-Solution Ind Co, which is based in Guangdong province and makes solar-powered lighting products, was not on a business trip－the purpose of her visit was to reward students with solar-powered lamps for excellence in their studies.

Smiling students at the school proudly held the lamps high above their heads.

The village where the school is located has no access to electricity. Residents have long been living without power and some had no idea what a lamp looked like.

Moreover, the lack of electricity is pervasive in sub-Saharan Africa, especially in rural areas, with the continent facing the biggest global shortfall in access to energy.

According to the International Energy Agency, nearly 800 million people worldwide live without electricity, about 75 percent of them in sub-Saharan Africa.

These people, usually earning incomes below the poverty line, either live in darkness after sunset or use the dim light of candles and kerosene lamps.

Media reports said that due to a lack of lighting, people have been killed by poisonous snakes in some regions and women have been sexually assaulted outdoors.

Li, who was born in northeastern China in the 1980s, dedicated herself to solar power efforts in Africa more than 10 years ago.

She said the continent has great potential to develop solar energy thanks to its geographical advantages, adding that there is a huge demand for such energy in Africa.

In recent years, policymakers, private investors and end-users have turned to off-grid solar products as an affordable and sustainable solution to accessing electricity.

In 2020, a report published by the World Bank Group and the Global Off-Grid Lighting Association said the off-grid solar sector had grown quickly in the past decade to become a $1.75 billion annual market serving 420 million users. As a result, prolonged growth is forecast for this market.

A summary of the report, published by the World Bank, said off-grid solar solutions have played a pivotal role in extending energy access to millions of people in sub-Saharan Africa and South Asia.

Shenzhen Power-Solution Ind Co jumped on the bandwagon and set up its own factory in 2012 with just 10 employees.

As a small and medium-sized enterprise, or SME, it is far beyond the company’s reach to construct large-scale solar power infrastructure. So, Li opted for off-grid solar power kits instead.