"I am very happy to be back home, thank you Nigeria," exclaimed a young woman on the airport tarmac. 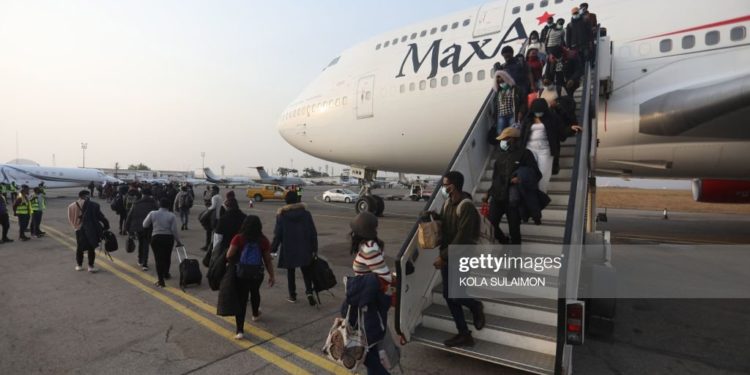 Nigerian students, who just got evacuated from Ukraine amidst the ongoing war between Russia and Ukraine, disembark from a chartered plane after landing at the Nnamdi Azikwe Airport Abuja, Nigeria on March 4, 2022. - A first batch of 415 Nigerian students who were studying in Ukraine were flown back home on Friday, according to an AFP reporter at the airport in the capital Abuja. (Photo by Kola SULAIMON / AFP) (Photo by KOLA SULAIMON/AFP via Getty Images)

A first group of 415 Nigerians who fled the Russian invasion of Ukraine were repatriated to their country on Friday, AFP journalists noted at the airport in the capital Abuja.

The group, mostly students, arrived in Abuja around 7:30 a.m. (0630 GMT) from Bucharest, the capital of Romania, one of the countries where many African students have fled.

The Nigerian nationals arrived with tired faces but looking relieved.

“I am very happy to be back home, thank you Nigeria,” exclaimed a young woman on the airport tarmac.

Several students, most still dressed in their winter clothes, recounted their traumatic experience.

Oyewo Elisha, 22, who was studying in Kharkov, immediately mentioned “heavy artillery, missiles, bombs and all that.”

Haroun Rukayat, 20, explained that she had to wait 14 hours in the cold before she could enter Romania.

“I am one of the lucky ones who managed to get out. For now, some people are still stuck in different cities, especially in Soumy where the war is raging,” she insisted.

“I am grateful and I thank God for protecting me.”

The government of Nigeria, Africa’s most populous country, has chartered three planes from local companies Max Air and Airpeace to Europe to repatriate more than 1,000 people.

7.7 million for the repatriation of about 5,000 nationals.

Many African countries are stepping up efforts to help their nationals who have flocked to Poland and Romania in particular, against a backdrop of accusations of racism at Ukraine’s borders.

On Tuesday, a first group of 17 Ghanaian students were repatriated to Accra, the capital of Ghana, of which more than 500 students managed to cross the Ukrainian borders to reach neighboring countries.

In total, one million refugees have fled Ukraine to neighboring countries since the Russian invasion began a week ago.