Yoon garnered a 48.56-percent support in the election held on Wednesday, defeating his liberal rival by a narrow margin, according to the final results released by the National Election Commission on Thursday. 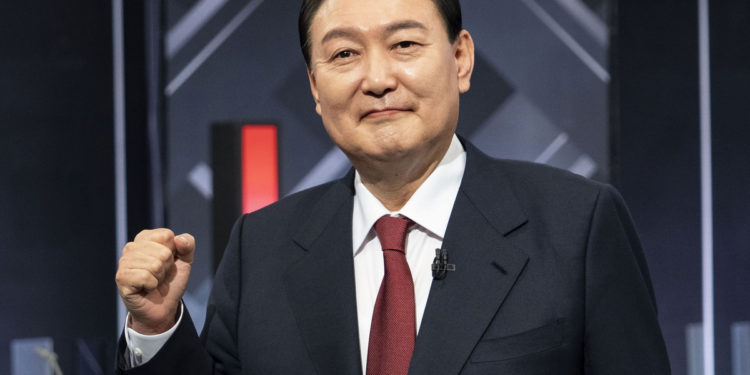 Lee Jae-myung of the ruling Democratic Party gained 47.83 percent, and Sim Sang-jung of the progressive Justice Party won 2.37 percent of the votes.

Yoon celebrated with jubilant party officials at the National Assembly building, saying in an aired speech that it was a victory of the great people.

The president-elect expressed thanks to his rivals, Lee and Sim who competed with him to the end, saying that the whole country should work together and be united as the competition ended.

Yoon’s election indicated a strong aspiration among his supporters for the transfer of power from the current liberal Moon Jae-in government to the conservative bloc.

“On March 9, 2022, I’ll make the transfer of power a reality and my new government will create changes,” Yoon said in his New Year’s message earlier this year.

Yoon pledged to realize sustainable peace and safety on the Korean Peninsula through a complete, verifiable denuclearization of the peninsula.

He vowed to come up with all possible measures to resume the stalled denuclearization talks on the peninsula in cooperation with the United States.

Yoon said he will rebuild the South Korea-U.S. alliance and strengthen the comprehensive strategic alliance between Seoul and Washington, vowing to actively push for the economic security diplomacy.

To boost economic growth, Yoon is expected to take a market liberalistic policy as he is opposed to the government’s economic intervention based on his firm belief in economic liberalism.

“I’ll firmly safeguard the constitutional values of liberal democracy and market economy,” Yoon said at a forum in November 2021, vowing to listen attentively to the voice of experts and the market.

The two other major candidates in the election conceded defeat to Yoon when the votes counting was almost completed amid a neck-and-neck race between Yoon and Lee.

Lee of the Democratic Party said in a televised address that it was neither the failure of people nor that of the governing party, laying all the blame on himself.

Lee offered his congratulations to Yoon, hoping that the new president would open a new era of unity and harmony in South Korea.

Sim said in a televised speech that she humbly accepted her poor score in the election as it was the assessment of herself and her party, expressing gratitude to her supporters despite the tight race between the two biggest political parties.

Yoon is scheduled to be sworn in as the South Korean president on May 10.

An early voting, which was adopted in 2013 and first applied to the 2014 local election in the Asian country, was held from March 4 to 5.