At 79, Biden is already the oldest president in US history. As he approaches his 80th birthday in November, when midterm elections will be held 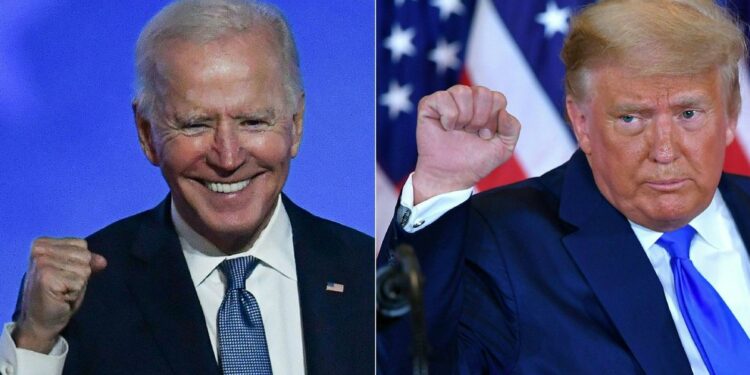 Incumbent US president, predecessor weighed down by negative perceptions

With the next US presidential election still more than two years away, a distinct lack of enthusiasm among voters for either the incumbent, Joe Biden, or the man he beat in 2020, Donald Trump, is palpable.

Sensing voters’ lack of stomach for a Trump presidency 2.0, Biden is keen for a rematch. Trump has not officially confirmed he plans to seek another term but has repeatedly hinted he will do so.

Yet just as Trump is now weighed down by considerable political baggage, so is Biden, the heftiest of those items being his age and what is considered his poor performance in office.

At 79, Biden is already the oldest president in US history. As he approaches his 80th birthday in November, when midterm elections will be held, questions over whether he should seek reelection in 2024 because of his age have grown ever more insistent in recent weeks.

Many media outlets have talked of the age issue. Politico reported last month that Democrats are privately raising concerns about it, and The New York Times, citing interviews with nearly 50 unnamed Democratic officials, reported on June 11 that Biden’s age is a “deep concern”, the headline on the paper’s front-page story reading “Should Biden run in 2024? Democratic whispers of ‘No’ start to rise”.

In that story, David Axelrod, the chief strategist for Barack Obama’s two winning presidential campaigns, told the Times: “He looks his age and isn’t as agile in front of a camera as he once was, and this has fed a narrative about competence that isn’t rooted in reality.”

The next day the Times followed with another front-page story, headlined “Most Democrats don’t want Biden in 2024, new poll shows”.

In the Times-Siena College poll of 849 registered Democratic voters nationwide, a variety of reasons were given by respondents for wanting a new nominee in 2024. Most cited Biden’s age (33 percent), with 94 percent of Democrats under the age of 30 saying they would prefer a different presidential nominee.

Following age was unhappiness with how Biden is doing the job. Only 27 percent of Democrats saw the country as being on the right track. About one in eight Democrats said they wanted someone new, and one in 10 said Biden was not progressive enough. Smaller fractions expressed doubts about his ability to win and his mental acuity.

READ MORE: Experts call for stronger partnership with China rather than copycat moves

The White House has publicly dismissed concerns about Biden getting older. “That is not a question that we should be even asking,” the White House press secretary, Karine Jean-Pierre, told CNN last month.

In the 2020 Democratic primary and general election, Biden dealt with an endless amount of ageist criticism.

Now, right behind the age issue is the highest inflation rate in 40 years, surging gasoline prices at the pump, though they have fallen slightly, the lingering pandemic, a spate of mass shootings and key congressional Democrats’ refusal to help push through Biden’s Build Back Better agenda or an expansion of voting rights.

For younger people, the most bitter recent source of disappointment has been the Supreme Court’s tossing out the constitutional right to abortion. Democratic voters and politicians soon faulted Biden for a lack of urgency and willingness to fight after the conservative court’s decision on June 24.

Ellen Sciales, the communications director at the Sunrise Movement youth climate activist group, said young voters want to see more action from Biden and the Democratic Party on issues such as abortion. “I don’t think we’re seeing his leadership shine through,” she told The Hill this month.

Trump, who turned 76 last month, is still solidly popular with Republicans, but polls show the House of Representatives Select Committee hearings on the Jan 6,2021, attack on the Capitol, with damning testimony by some of Trump’s former administration officials, White House aides and other Republicans, have taken a toll among Republican voters.

A Reuters/Ipsos poll, whose results were published on July 21 hours before the eighth hearing of the congressional inquiry, showed that 40 percent of Republicans now believe Trump is at least partly to blame for the deadly riot, up from 33 percent in a poll conducted six weeks ago.

Thirty-two percent of Republican respondents said they “strongly” or “somewhat” agreed with the statement that Trump “should not run for president again in 2024”.Twenty-six percent proffered such a view just six weeks ago.

Fifty-five percent of Republicans said they believed Trump’s claim that the 2020 election was stolen, compared with 66 percent six weeks earlier.

Though Trump has firm support among Republican voters, some of the party’s other potential candidates for 2024, Trump’s former vice-president Mike Pence and Florida Governor Ron DeSantis have been moving into the spotlight.

Pence has increased appearances at conservative events in recent weeks and has made some high-profile endorsements against his former boss’ preferred candidates in key primary races.