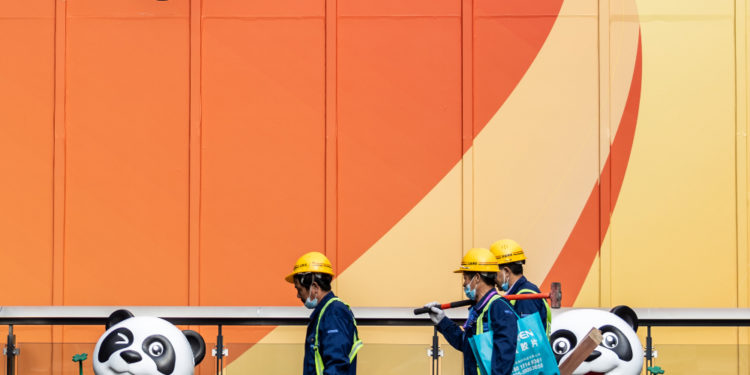 The China International Import Expo, which opens on Wednesday in Shanghai, is ready to host foreign companies and domestic buyers with larger exhibition areas, new features and absolute safety, organizers said at a news conference on Friday.

The participation from leading companies has been active for the expo’s third edition despite the COVID-19 pandemic, said Sun Chenghai, deputy director-general of the CIIE Bureau.

More than 70 percent of the world’s Fortune 500 companies and major players of different industries are repeat exhibitors, and dozens of companies have signed up for the expo in the next three years, he said.

Apart from old friends, the expo will welcome many newcomers well-known in their fields, including US medical devices company Abbott, Swiss luxury goods group Richemont and French tire manufacturer Michelin.

Companies from China’s major trade partners have continued showing enthusiasm for the expo, Sun said, adding that the number of Japanese exhibitors passed 400, up 10 percent from last year’s expo, while the number of French exhibitors increased by 7 percent to 80.

“The expansion has fully demonstrated that the world is confident in the Chinese economy and global companies have huge expectations for the Chinese market in these special times,” Sun said.

Two-thirds of them come from the country’s three major economic engines－the Yangtze River Delta, the Guangdong-Hong Kong-Macao Greater Bay Area and the Beijing-Tianjin-Hebei region, and nearly 1,400 of the companies import more than $100 million in goods annually, Sun added.

Chen Yin, vice-mayor of Shanghai, said the city has attached great importance to epidemic control and has taken a series of measures to ensure the safety of the expo amid the COVID-19 pandemic, including an over-arching epidemic prevention plan, 23 special programs, six contingency response plans in case of an outbreak, and 13 technical protocols and manuals.

Among the measures, all expo participants will need to take COVID-19 testing, temperature checks and submit health declarations. Visitors from overseas will undergo a 14-day quarantine.

In the expo venue, five medical stations and 25 temporary observation zones will be stationed by 400 medics. Across the city, 33 hospitals were designated to handle any emergency cases from the expo.

A professional sanitation team will disinfect the whole expo venue twice a day, and constantly disinfect public spaces such as elevators, toilets and door handles.

This year’s expo will not be open to the general public and will not organize extended exhibitions as in previous editions, but many of the products displayed will continue to be available to Chinese buyers and consumers at 56 trade and shopping centers across the city.

Themed on dealing with common challenges through collaboration, the Hongqiao International Economic Forum will be held during the expo, with some high-level politicians, business executives and experts attending the forum online.