Democratic presidential candidate Joe Biden has selected US Senator Kamala Harris of California to be his running mate, making her the first black woman and the first Asian American on a major presidential ticket. 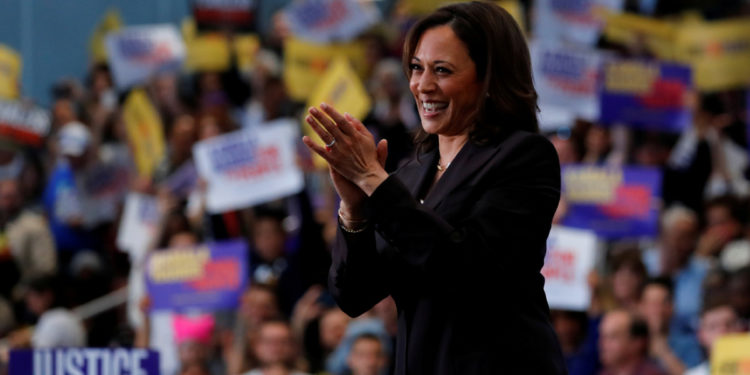 “I have the great honor to announce that I’ve picked @KamalaHarris — a fearless fighter for the little guy, and one of the country’s finest public servants — as my running mate,” Biden wrote Tuesday on Twitter.

Biden and Harris will make their first joint appearance as a presidential ticket on Wednesday in his hometown of Wilmington, Delaware, the campaign said.

“Choosing a vice president is the first important decision a president makes,” said former president Barack Obama, for whom Biden served as vice-president, in a statement. “Biden nailed this decision.

“By choosing Harris as America’s next vice president, he’s underscored his own judgment and character,” Obama added. “Reality shows us that these attributes are not optional in a president. They’re requirements of the job. And now Joe has an ideal partner to help him tackle the very real challenges America faces right now and in the years ahead.”

Biden vowed to choose a woman as his running mate in March. In the wake of protests and social unrest following the May 25 death of George Floyd over racial injustice and police brutality against African Americans, Biden had been under increasing pressure to select a woman of color as his running mate.

Harris, 55, who became only the second black woman to serve in the Senate when she was elected in 2016, can be expected to help Democrats’ efforts to secure votes from African Americans, one of the party’s most loyal constituencies.

Four years ago, a dip in black voter turnout, the first in 20 years, contributed to Democrat Hillary Clinton’s upset loss to Trump.

The black vote is also central to Biden’s hopes of winning Florida and Georgia, two Southern states that Trump carried in 2016 but that polls indicate could be competitive this year.

A former San Francisco prosecutor and state attorney general in California, Harris is best known for her aggressive questioning style in the Senate, most notably against Brett Kavanaugh during his 2018 Supreme Court confirmation hearing.

Harris attacked Biden in a nationally televised June 2019 debate over his past positions on busing and desegregation, which allegedly made some members of Team Biden wary of her aggressive tactics and political ambitions.

During a June appearance on The Late Show with Stephen Colbert, Harris jokingly defended her performance a year earlier: “It was a debate! The whole reason — literally, it was a debate. It was called a debate.”

Within minutes of the announcement, the Trump campaign released a video over Twitter in which a narrator says: “Voters rejected Harris. They smartly spotted a phony. But not Joe Biden. He’s not that smart. … He is handing over the reins to Kamala while they hand over the reins to the radical left.”

Trump himself called Harris “nasty” multiple times during a White House briefing Tuesday afternoon, citing her treatment of both Biden and Kavanaugh, adding that she was “just about the most liberal person in the US Senate”.

“She was very, very nasty,” Trump said. “She was very disrespectful to Joe Biden. … She said things during the debate, during the Democrat primary debates that were horrible about Sleepy Joe. And I would think that he would not have picked her.

“She was nasty to a level that was just a horrible thing, the way she was, the way she treated now-Justice Kavanaugh,” Trump added. “And I won’t forget that soon.”

But Trump donated $6,000 total in 2011 and 2013 to Harris when she was running for reelection as California’s attorney general. In 2015, Harris donated $6,000 to a nonprofit organization that advocates for civil and human rights for Central Americans.

She abandoned her own presidential run in December and endorsed Biden on March 8. Harris will now be relied on to be a battle-tested partner to going on the offensive against Trump and Vice-President Mike Pence. Harris is scheduled to debate Pence on Oct 7 in Salt Lake City, Utah.

Biden, who turns 78 on Nov 20, would be the oldest person to become president if elected. Biden’s age also has led to broad speculation he may serve only one term, making Harris a potential top contender for the nomination in 2024. Some of his allies were concerned that would make her a bad fit for the No 2 job and questioned her loyalty, reported Reuters.

After Floyd’s death, Harris became a prominent voice in the push for racial justice and police reform, standing with marchers and sparring with Senate Republicans over reform legislation.

Harris at times came under criticism from some in the black community and from progressives for her record as California attorney general where, they say, she did not do enough to investigate police shootings and too often sided with prosecutors in wrongful conviction cases.

Her defenders say she has always been reform-minded, pointing to her record in the Senate, where she has championed a police-reform bill and an anti-lynching bill.