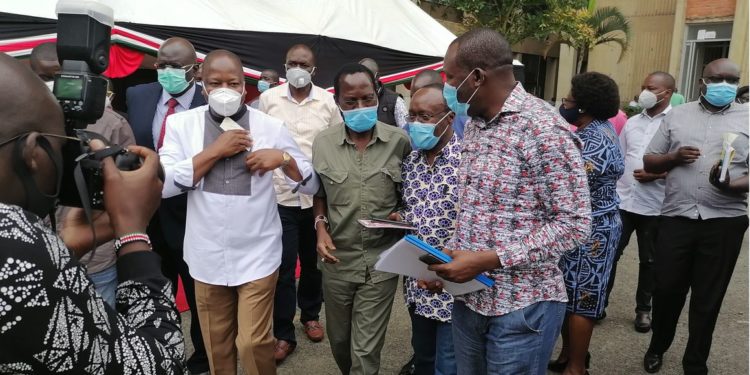 Health Cabinet Secretary Mutahi Kagwe, in a tour of Kisumu County with other officials, also reported two more deaths and 1,062 more recoveries, the highest number Kenya has ever recorded since the virus was first confirmed on march 13.

This raised Kenya’s death toll to 420 and the total number of recovered patients to 12,961.

The 4,420 samples pushed the number of those tested in the country since the first case was reported to 353,727.

Of the new patients, 593 were Kenyans and six foreigners. Male patients numbered 373 and female patients 226 while the youngest was a year old and the oldest 82.

Of those who recovered, only 79 were discharged from hospitals and 983 from home-based care programmes.

They went to the town campus of Maseno University, where they visited a call centre, accompanied by Governor Anyang’ Nyong’o and MPs Shakeel Shabbir (Kisumu Town East) and James Nyikal (Seme).

The facility has a capacity for 100 beds, part of the total of 401 that Prof Nyong’o said were available in the county as of Saturday.

The governor thanked county officials for roles played in the fight against the virus, noting the county had enhanced surveillance, screening and contact tracing.

CS Kagwe praised the county for sensitisation of police officers and members of the National Youth Service.

While also praising Kisumu residents for maintaining high standards of hygiene and wearing face masks, he noted, “The act of wearing a mask and observing other health precautions is not a favour to law enforcement officers. It’s a responsibility that we should take seriously.”

In his address, CS Magoha noted that the decision the ministry made, to reopen schools in January 2021 as part of measures to curb the virus, was in consultation with all stakeholders.

He also clarified that schools have not been closed indefinitely and that the reopening date will be revised accordingly based on prevailing circumstances.

“Millenials think the disease is a joke but some have infected their family members and killed their parents, so don’t tell me to open schools because the young people are going to be the super-spreaders of the virus,” he said.

“Until the virus is contained, let us teach our children at community level at no charge. Over 100 schools have closed schools.Kenya has no apologies for shutting schools in order to save the children,” he went on to say, noting the option enrolling them at private schools.

He told parents to negotiate with private institutions for payment of a fraction of the school fees for online learning.

Prof Magoha, while noting the burial culture of the Luo and other communities in Kenya, also asked the people to change the way they conduct the ceremonies.