Cira 02 female-like robot is all white, with a monitor on the chest that displays scan results of anyone facing it. It also has several sensors and a place where a person can rest his chin for a COVID-19 PCR test. 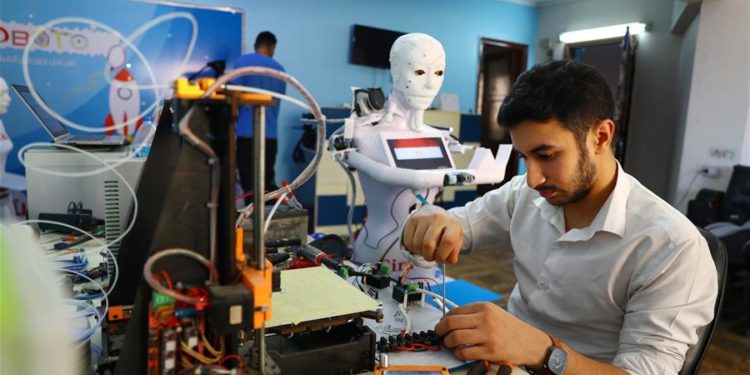 TANTA, Egypt – At his Roboto Academy in Tanta city in northern Egypt, 26-year-old mechatronic engineer Mahmoud el-Komy was testing Cira 02, a robot invented for the diagnosis of COVID-19 infection and post-infection medical care.

It is enough for a person to pass or stand in front of Cira 02 to be scanned and told with the robot’s voice if his temperature is normal or if he is suspected of being infected with COVID-19 respiratory disease.

The no-entry barrier on the right shoulder of Cira 02 acts as a gate guard that will not allow a person suspected of infection to go through.

The structure of Cira 02, a development of older Cira 01 version, is composed of assembled pieces made by a 3D printer invented by the Egyptian engineer.

“Cira 01 had limited abilities, but Cira 02 has better sensors for faster fevering tests and oral communication to give advice, being a gate guard to protect vital places from infected visitors,” el-Komy told Xinhua.

After one hundred days of war, Ukraine’s health system is under severe pressure: WHO

Cira 02 can be used in crowded places, such as banks, airports and stations. It can also disinfect the place when it recognizes an infected or possibly infected person through face recognition, according to the Egyptian engineer.

“In case of infection or suspected infection, it sounds an alarm and reports the person to concerned authorities,” el-Komy explained.

Standing and moving on four wheels, fully autonomous Cira 02 is supplied with IoT (Internet of Things), a remote-control system through which the robot can be controlled from anywhere in the world via an internet link that can be sent to anyone by the inventor.

“It has always been my dream since childhood to see Egypt a technology exporting country rather than a technology consumer,” the Egyptian robot inventor concluded.

The creative young man’s efforts did not go in vain, for his robot was welcomed by the Egyptian Ministry of Communications and Information Technology (MCIT).

Yasser Abdel-Bary, program manager of Electronics Industry at the MCIT, described el-Komy’s invention to use robots in medical treatment as “so promising and timely.”

“When we heard about it, we immediately offered to assist el-Komy to produce his upcoming version Cira 03 at our labs and technological support facilities that would greatly facilitate his job,” the Egyptian official told Xinhua.

“El-Komy’s robot can be developed to include other applications and deal with different infectious diseases in the future, so it is a very important project,” Abdel-Bary added.

The costs of producing Cira 01 and its developed version Cira 02 were covered by popular political party Mostaqbal Watan (Nation’s Future), which financially sponsors the project to encourage creativity in Gharbiya and nationwide.

“It is my duty to support creative young people in my province, and it is the duty of every businessman to encourage creative youth who have constructive ideas to offer the country,” said Mohamed Oraiby, a businessman and secretary of Mostaqbal Watan in Gharbiya.

“We believe that education and scientific research are the basis of development and we’re willing to back creative people regardless of their age,” Oraiby added.

Designed for teaching children robotics, the Roboto Academy is full of tools and electronic accessories, with posters of robots and scientific shapes and phrases hanging on its walls.

Abdel-Rahman Hossam, a 16-year-old high school student, is one of two creative boys who have worked as el-Komy’s assistants during his invention of Cira versions.

“I already love science. I learned many things at Roboto Academy, such as robot programming and designing, and joined several scientific competitions through the academy over the past few years,” Hossam said at the academy.