“The President used the occasion to express sincere condolences of the Government and people of Nigeria to EU-member countries and families who lost their loved ones as a result of the COVID-19 pandemic,’ the presidency wrote on Twitter. 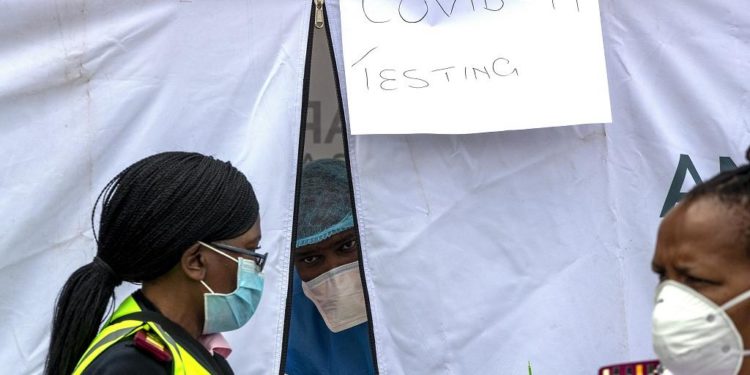 Of the 19 cases, 14 were recorded in Lagos, 2 in Federal Capital Territory (Abuja), one each in Kano, Akwa Ibom
and Edo states. Cases in Lagos now stands at 214, 58 in Abuja with 20 in Osun completing the three most impacted list.

Edo hits fifteen with the new case whiles Kano’s tally is four and Akwa Ibom at six. So far 20 states have recorded cases out of the 36 states.

Nigeria is to benefit from a European Union donation of $55m to boost the country’s fight against coronavirus. A statement from the presidency confirmed the development after a meeting between an EU delegation and President Muhammadu Buhari today.

“Receiving the EU delegation to the country, led by Amb Ketil Karlsen, President Buhari said the donation would go a long way in supporting Nigeria’s efforts at controlling & containing the virus to prevent community spread, as well as revitalise the national health care systems.

“The President used the occasion to express sincere condolences of the Government and people of Nigeria to EU-member countries and families who lost their loved ones as a result of the COVID-19 pandemic,’ the presidency wrote on Twitter.

In his remarks, Ambassador Karlsen described the donation, channelled through the UN COVID-19 basket fund as, so far, the largest single contribution to the response in Nigeria and the largest support that EU is providing anywhere outside Europe.

The EU Ambassador congratulated President Buhari for “a very powerful address to the nation last night”, stressing “indeed the current situation is no joke and we wish to commend you for taking bold and necessary measures.”

He also announced that the European Union was mobilising other sources of funding, noting that they have already paid 1.2 million Euros to UNICEF, and goods purchased through that funding are expected in the country soon.

The elaborate plan that targeted German health authorities had to do with securing of face masks in the wake of the COVID-19 pandemic. INTERPOL reported that what started as a chain of referrals eventually led to compromised emails and an advance-payment fraud scheme.

“It all started with an email address and website which appeared to be linked to a legitimate company in Spain selling face masks. Unbeknownst to the buyers, the site was a fake and their legitimate email addresses had been compromised,” the report said.

Nigeria popped up at the point of chasing advanced payments to the fraudsters. A majority of emergency payment, EUR 880,000 by the German buyers to the supposed Dutch supplier was moved from the Netherlands to the United Kingdom with the final destination being Nigeria, INTERPOL said.

The relevant paragraph read: “The Dutch Fiscal Information and Investigation Service quickly tracked down the EUR 880,000 which had been transferred from the German company. Nearly EUR 500,000 of those funds had already been sent to the United Kingdom, all of which was destined for an account in Nigeria.”

INTERPOL did not state whether the recipient of the said funds was known or will be traced. It is not known whether Nigeria’s Economic and Financial Crimes Commission, EFCC, have been contacted, neither have they commented on the issue.

Advance-fee fraud also known as 419 is one of the main crimes that the EFCC have busted over the years. It was one of the areas that earned the pioneer EFCC Chairman Nuhu Ribadu, national and global acclaim in the line of anti-corruption in a country that has been bedeviled by corruption in different levels of society.

The president has since signed the Quarantine Act Regulations No. 2 of 2020 to operationalize the order. Abuja and Lagos are Nigeria’s most impacted in the COVID-19 pandemic. In a televised address on Monday, Buhari described the fight as a matter of “life and death.”