Interior minister says explosion at port appears to have been caused by ammonium nitrate stored in warehouse. 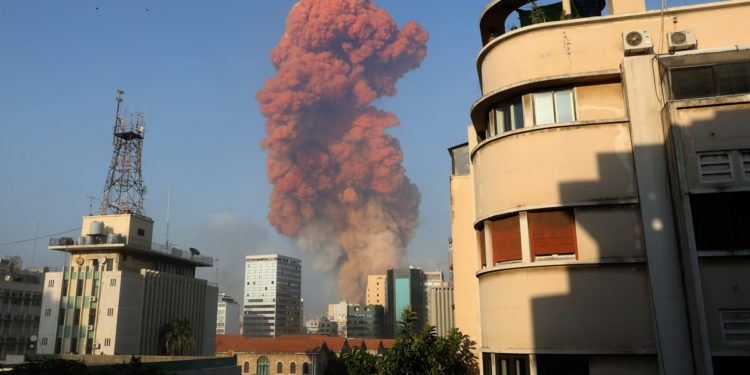 A picture shows the scene of an explosion in Beirut on August 4, 2020. - A large explosion rocked the Lebanese capital Beirut on August 4, an AFP correspondent said. The blast, which rattled entire buildings and broke glass, was felt in several parts of the city. (Photo by Anwar AMRO / AFP)

Beirut, Lebanon – Dozens of people have been killed and thousands wounded in a powerful explosion that ripped through Lebanon’s capital, Beirut.

The massive explosion on Tuesday at Beirut’s port sent shockwaves across the city, causing widespread damage to buildings and shattering windows in different parts of the capital.

The exact cause of the explosion was not immediately clear. Mohammed Fahmi, Lebanon’s interior minister, said it appeared to have been caused by ammonium nitrate that was stored in a warehouse at the port.

Hamad Hassan, Lebanon’s health minister, gave an initial toll of 27 dead and some 2,500 wounded. The death toll was expected to rise.

Helicopters circling the port area were trying to extinguish a large fire.

At Hotel-Dieu hospital, dozens of people trying to enter were being turned away.

After a man was pronounced dead, a young woman told an infant child, “Youssef, dad is in heaven.” One man collapsed on the hospital floor and smacked it, while another man said “it’s a catastrophe”.

Several people on board an Italian ship docked near the explosion site, the Orient Queen, were wounded and taken to hospital.

“The ship is totally destroyed – the cabins the lounge, everything,” Vincenco Orlandini, a 69-year-old crew member, told Al Jazeera.

“I heard the blast and I flew to the opposite of the lobby, then I landed on the carpet and I’m lucky, I think that saved me.”

Video of the explosion taken by Al Jazeera shows a large column of smoke billowing from an area of the port that houses large warehouses before a large orange explosion is seen and huge dome-shaped blast wave shoots into the air.

Glass storefronts and windowpanes across the city were shattered in the explosion, while videos and pictures shared on social media showed doors ripped from their hinges and ceilings filled with gaping holes.

A civil defence worker who has worked in the sector for 20 years was in disbelief at the scale of the damage.

“I’ve seen the assassinations and the explosions but this is something else. There is something wrong here,” the worker said.

The explosion in Beirut port comes as the country faces an unprecedented financial crisis and a surging coronavirus outbreak.

Located in the heart of capital, the port is a vital piece of infrastructure used to get scarce goods in the country.

Damaged in the explosion were silos containing wheat that burned for several hours.