Int´l: The European Union looks at fresh travel ban from US

EU will discuss this week whether to reimpose travel restrictions on the US after a rise in COVID-19 cases in the US over the past weeks and after Washington failed to lift a ban on EU travelers. 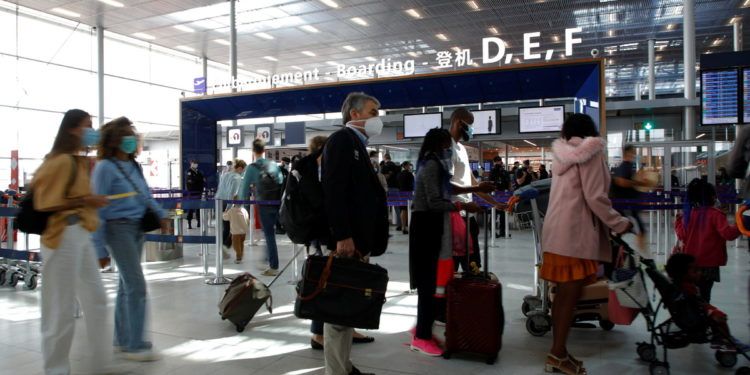 The EU conducts regular reviews of the list of countries from which travelers can arrive in the bloc, with its ban on travel from the US being lifted in June after the epidemiological situation in the US improved to meet EU standards.

The US recorded close to an average of 100,000 new cases daily in the week to Friday, the US Centers for Disease Control and Prevention said. This is the highest number of infections in the past six months.

An EU official, quoted by both Reuters and Bloomberg, referred to the possibility of new restrictions on the US, but said they would only apply to nonessential travel. Those who are fully vaccinated should be able to enter EU member states, the official said.

Removing the US from the list would require approval by a qualified majority of the 27 member states.

Last week European Commission President Ursula von der Leyen voiced dissatisfaction over the US for not reciprocating the EU’s lifting of its travel ban on the US.

“We are in contact with our American friends to solve this problem as soon as possible,” she told the German media RND on Wednesday. “The situation can no longer drag on for weeks.”

EU citizens have been unable to travel to the US since early last year, with the exception for people such as relatives of US citizens, diplomats and employees of international organizations.

Von der Leyen’s words came after widespread public discontent about the US policy. US President Joe Biden told the visiting German Chancellor Angela Merkel early last month that his administration was “in the process” of considering how soon the ban on inbound travelers from Europe could be lifted. But Jen Psaki, the White House press secretary, dashed that hope on July 26 by saying the US has no immediate plans to lift existing travel restrictions, citing concerns over the spread of the highly transmissible Delta variant.

The EU has surpassed the US in vaccinations, with von der Leyen declaring on July 27 that 70 percent of EU adults had received at least one jab and that 57 percent of adults had been fully vaccinated.

Some EU member states have introduced new measures in an effort to stop the spread of the Delta variant.

Italy, which reported 7,200 new cases on Thursday, began to enforce a policy on Friday that requires a pass known as the EU Digital COVID Certificate to be presented for access to museums, theaters, gyms and indoor dining. The government also agreed to make the pass mandatory for teachers and passengers on domestic flights, ferries and long-distance trains and buses from Sept 1.

The French government has required the certificate since July 21 for cultural venues such as museums and theaters. From Monday the pass will be needed to eat in a restaurant, drink at a cafe, both indoors and on a terrace, or take intercity trains and flights.

The decisions have triggered weeks of protests. On Saturday almost a quarter of a million people took to the streets of France for the biggest protests yet against the COVID-19 certificate, the TV channel France24 said.

A government spokesman, Gabriel Attal, said the certificate, which will be required until Nov 15 under current rules, is needed to avoid further restrictions as France battles a fourth wave of COVID-19.