ANKARA－Turkey surpassed Iran in the tally of total COVID-19 infections, becoming the hardest-hit country in the Middle East, as the confirmed cases in the country exceeded 82,000. 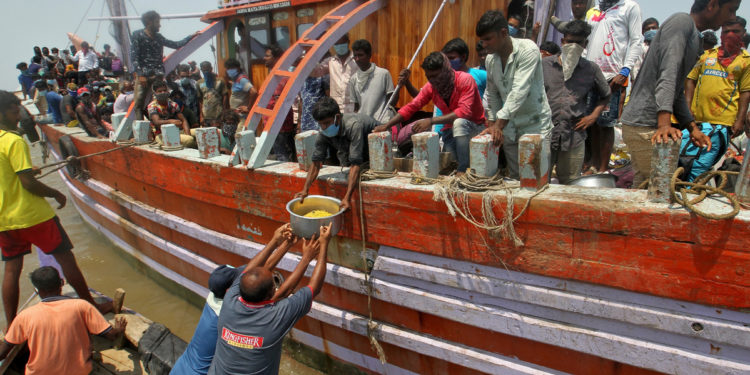 Local fishers offer a container with food to other fishers, who said they were refused entry at two ports after traveling in the Arabian Sea to reach their home in Dahanu, India, on Friday. A nationwide lockdown to fight COVID-19 continues in the country. PRASHANT WAYDANDE/REUTERS

Turkey’s infections on Saturday rose to 82,329 after 3,783 new cases were confirmed, while the death toll from the virus reached 1,890.

Turkish President Recep Tayyip Erdogan on Saturday aerially inspected the work on two COVID-19 hospitals in Istanbul, which are expected to provide full capacity service with 1,008 beds each.

Iran allowed some businesses in the capital and nearby towns to reopen on Saturday after weeks of a lockdown aimed at containing the worst outbreak in the Middle East.

President Hassan Rouhani on Saturday urged the health authorities to outline the conditions for the reactivation of “medium-risk” businesses as the country’s infection pace has slowed recently.

Government offices have, however, reopened, with a third of employees working from home, but schools and universities are still closed.

Iran had reported 82,211 infections by Sunday while the tally of deaths reached 5,118.

In Israel, another hard-hit country in the region, Prime Minister Benjamin Netanyahu announced on Saturday the easing of restrictions on activity at workplaces, expanding public transport and reopening certain stores to restore the economy.

Infections in the country grew to 13,362 on Sunday and the death toll stood at 171, according to health authorities.

Singapore reported 596 new cases on Sunday, taking the city-state’s total number to 6,588. The vast majority of the new cases are migrant workers living in dormitories, the health ministry said.

South Korea on Sunday reported eight more cases of the coronavirus, the first time a daily increase has dropped to a single digit in about two months, taking its tally to 10,661.

But despite the recent downward trend, South Korean officials have warned about the possibility of a broader “quiet spread” with people easing up on social distancing.

South African President Cyril Ramaphosa on Saturday chaired a virtual meeting of the President’s Coordinating Council to discuss measures to strengthen and intensify the country’s response to the pandemic, as the country had 3,034 cases as of Saturday.

The council agreed on the need for a risk-adjusted approach to revive economic activities after a five-week nationwide lockdown that will end in late April.

The Nigerian president’s chief of staff, Abba Kyari, 67, died on Friday of COVID-19, the presidency said on Saturday, making him the most high-profile person in the country to die in the coronavirus outbreak.

Egypt reported on Saturday 188 new cases, the highest daily increase, taking the number of infections to 3,032.

The country has imposed a night curfew since March 25 and will halt public transport on Monday during a public holiday in an effort to contain the spread of the virus.

The number of infections in Africa have surpassed 20,000, according to the Africa Centers for Disease Control and Prevention. Deaths across the continent surpassed 1,000 on Saturday.