French President Emmanuel Macron called on his political opponents on Wednesday to "leave infighting behind" and urged "responsibility and cooperation". 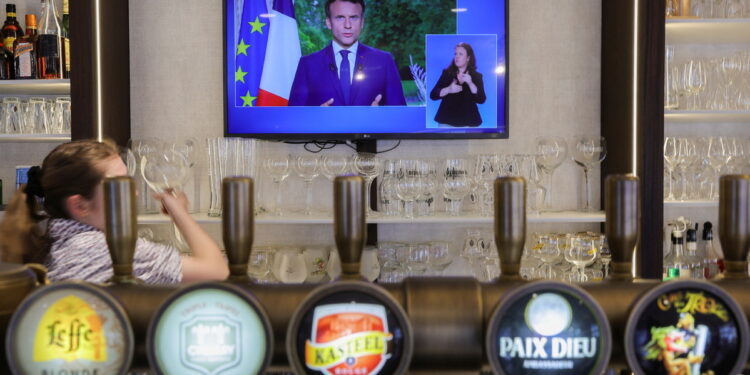 In his first address to the nation since Sunday’s parliamentary election setback, Macron proposed to “legislate in a different way” based on compromise among diverse political forces.

The speech came after two days of meetings with the leaders of rival parties, including far-right leader Marine Le Pen who lost to Macron in the April presidential election, in a bid to reach compromise.

“As in most Western democracies, whether it is Germany, Italy, or many others, no single political force can make the laws today,” Macron said in the televised address.

“We must collectively learn to govern and regulate differently.”

Macron is the first French president whose alliance did not win an absolute majority in parliament since the 1980s, causing concerns about his government’s ability to push forward its agenda, especially the controversial pension reform.

Macron’s alliance won 245 seats on Sunday, 44 seats short of the 289 seats required for an absolute majority in the 577-seat parliament.

Macron expressed that the opposition was ready to work with him on “major” issues and promised measures on inflation, climate change and unemployment in the coming months.

He acknowledged that the parliamentary election had highlighted social problems in France, but he called on the opposition parties to “leave infighting behind” and move “beyond politics”.

He said the current political impasse should not lead to “stagnation”, but to renewed dialogue and a new “willingness to listen to each other”.

Macron expressed that he still plans to carry out the ambitious reform he promised when he was reelected in April.

Most analysts have expected Macron to seek a partnership with center-right Les Republicains to reach an absolute majority in the parliament. But after meeting Macron on Tuesday, party leader Christian Jacob ruled out any kind of “pact” with Macron’s alliance and said his party prefers to remain in the opposition.

“The president reinterpreted the political landscape tonight, starting from the idea that he would have received a clear mandate from the country in April. This is not the case: he was elected because a majority of French men and women did not want the far right to preside,” Melenchon said.