Egypt equally targets to produce green methanol, and green ammonia, specifically as ship fuels, given the special location of Egypt among the other qualifications that enable it to stand out in such fields. 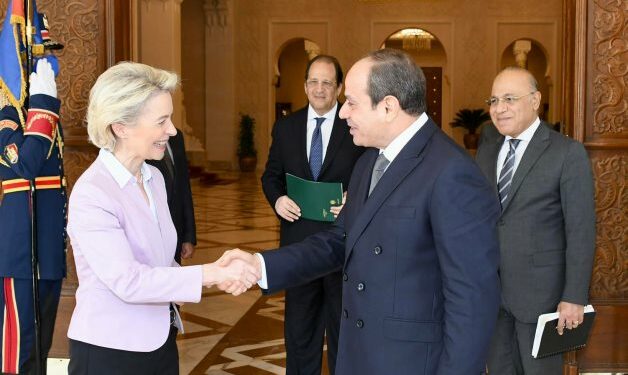 The Russian-Ukrainian conflict has brought Egypt and the European Union even closer together, as its Commissioner Ursula Von Der Leyen described the North African country as a “trustworthy partner” in its Wednesday visit to Cairo and thus would be one of the EU’s energy suppliers.

During a press conference with President Abdel Fattah al-Sisi, Von Der Leyen highlighted a memorandum of understanding signed on the same day to transfer natural gas from Israel to Egypt for liquification and then delivery to Europe.

“It is known that Russia’s war against Ukraine has exposed our European dependency on Russian fossil fuels and we want to get rid of this dependency. We want to diversify to trustworthy suppliers,” the commissioner said.

“[The MoU] is a big step forward in the energy supply to Europe but also for Egypt to become a regional energy hub,” she added.

Von Der Leyen also highlighted how there will be “enormous demand” on renewable energies in the future, and because Egypt is rich in sunlight and wind, the EU will explore with Egypt means to put infrastructure and technologies in place to prepare for the country for that very future.

She set Egypt’s partnership with the EU in a green hydrogen project as an example, while Sisi presented Egypt’s preparations for COP27 in November.

Egypt has already signed MoUs with Maersk, Norwegian firms, UAE, on the production of green hydrogen mainly in the Suez Canal area. It is also negotiating an MoU with Toyota Tsushu on blue hydrogen.

Minister of Electricity Mohamed Shaker said in April that 7,650 square kilometers were allocated to renewable energy projects given the country’s potential to produce 90 gigawatts of solar and wind energy.

He clarified that the share of renewable energy in the electricity produced by Egypt hit 20 percent in 2021, although that figure was targeted for the end of 2022. Yet, it is still a long way to go as the target set for 2035 is 42 percent.

Egypt equally targets to produce green methanol, and green ammonia, specifically as ship fuels, given the special location of Egypt among the other qualifications that enable it to stand out in such fields.

Sisi and Von Der Leyen also discussed the prioritization of dialogue amid crisis of the international community and how the damages to food security and soaring prices of energy can be curbed.

Von Der Leyen said that alongside the international community, the EU strives to find solutions to the grain crisis and to have them distributed worldwide.

Hence, the EU will provide 100 million euros to Egypt to face soaring prices and food shortage, hoping this would enhance grain stocks on the short term and increase production locally.

Further, three billion euros will be provided to the region to develop solutions and technologies to increase local production of food, reducing dependency on other regions.

The Egyptian president said his talks with the EU commissioner focused on energy, power linkage and natural gas, as well as cooperation at the technical and financial levels to produce green hydrogen.

As Egypt strives to make a developmental leap, they discussed prioritized sectors such as clean energy, food security, digital transformation, electric transportation, modern agriculture and irrigation, and encouraging European companies to invest in Egypt and Africa, the president said.

He welcomed the nearing endorsement of the document “EU-Egypt Partnership Priorities Document for 2021-2027,” which is expected to form a huge transformation in institutional coordination between the two sides.

Sisi highlighted Egypt’s measures to preserve the difficult gains it made during the years of economic reforms that cost Egyptians “a lot of sacrifices,” only to be hit by Covid-19.

He also tackled regional issues and Egypt’s steps to counter terrorism and illegal immigration and GERD, saying he wants a legally binding agreement that realizes the interests of all parties.

In September 2020, Sisi launched 2021/2026 human rights strategy as one that includes the comprehensive concept of human rights, which is to be integrated with Egypt’s national development Vision 2030.

In April, head of the National Council for Human Rights Moushira Khattab said the human rights strategy indicates “a serious will to change and a golden opportunity” that must be ceased to raise the ceiling of civil and political rights.

For almost a decade, Egypt has reiterated at international forums that human rights include economic and social rights, as well as access to education, health, and cultural venues, and other living standards.

While Von der Leyen did not touch on the subject, the issue has been contentious between Egypt and some EU member states such as Germany, whose Foreign Minister Anna Baerobock said from Cairo in February that “there is no distinction bet human rights and security and economic development; both rely on each other.” She added that human rights conditions in Egypt would play an important role in the German-Egyptian relations.